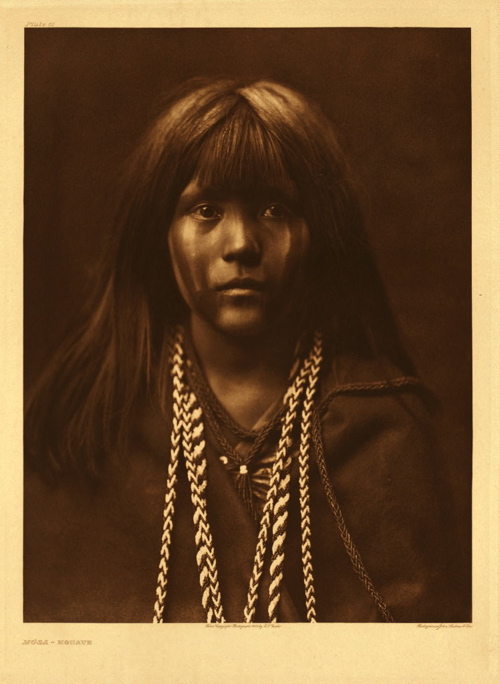 I’d like to post two more images of photos from the current show Edward L. Curtis and the Vanishing Race at the Museum of Wisconsin Art in West Bend. http://www.wisconsinart.org/exhibitions/current.aspx

These suggest how photographer Curtis, a native of Whitewater, dealt with virtually all aspects of Native American life, not just the Indians we’ve heard of who fought heroic and ultimately doomed battles for their land and tribe. The Indian’s passion for their land was deep and spititual. Black Elk prfoundly express the passion’s wisdom by declaring “The Holyland is everywhere.” The “holyland” begat the verdant and living nature and feed the people and the women and children were the brightest blossoms of the Nature-to-humanity continuum.

Mosa (above) captures the beauty and budding mystery of a Mojave girl fully embracing her native culture. Culture makes us want to understand her choices and values at a time when she is still forming and articulating them for herself. And what lies within her somber aura (disconcerting to see in one so young)? Does the sadness contain age and wisdom beyond her years, gained in hard ways? The stunning image of is also significant because it captivated J.P. Morgan, then perhaps the world’s richest man. Morgan had refused financing of Curtis’ anthropological documentation project The North American Indian — until he saw this photo of lovely Mosa. 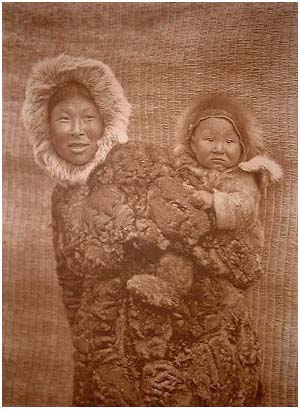 “Woman and Child” 1927 by Edward Curtis. Courtesy The Dubuque Museum of Art.

The above photo depicts a woman and child whom Curtis encountered on Nunivak Island in the far north of an Alaskan summer. It also reveals Curtis’ humane and sharp eye for contrasting, layered textures which enhanced the visual storytelling of the man Indians called “The Shadow Catcher.”

Conducted with Curtis’ daughter Beth, this was from the final field trip for The North American Indian. My full review of the exhibit is here: