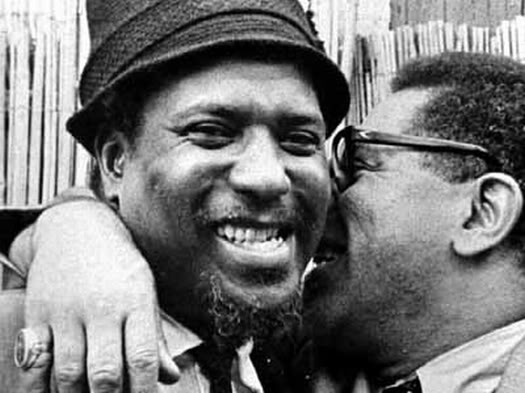 Bud P. may have unwittingly framed Monk (in a moment of fear) but at least Diz still loved him… image courtesy indulgy.com

This great FB posting by the superb jazz historian and critic Ted Gioia (The Imperfect Art, The History of Jazz, etc.) gassed me enough to do a quickie post.

You’ll find on the link a sardonic, truth-telling cartoon strip detailing the infamous arrest of Thelonious Monk which led to his unjust imprisonment at Riker’s Island and loss of his New York cabaret card… A serious dent in his career at the time.

It’s apparently something conceived/written by the late John Wilcock and illustrated by artists Ethan Persoff and Scott Marshall.

The strip is in full color, to massage your eyeballs. I also love that the two artists collaborate with Persoff living in Austin, Texas and Marshall in New York.

Wilcock recounts seeing Monk perform at The Five Spot in New York for the first time after the reinstatement of his cabaret card. He describes how Monk almost magically appears without announcement on the stage, sits down and plays and, when he’s done, gets up and disappears again.

Now I think I know how Monk influenced the phenomenal pianist-composer Cecil Taylor in one way. Taylor, also a swiftly athletic dancer, does a similar sort of phantom-like appearance, perform-and-disappear routine, as a sort of performance-art aspect of his concerts. At least he did the last couple of times I last saw him live, a number of years ago (too long!).

This ‘toon about Monk is a serious piece of American cultural history, and will help you discover a cool, offbeat and politically aware website/ blog site Boing-Boing…

Thanks to Ted G, for the connection and turn on,

btw, read about the sorry incident in greater detail (and everything you wanted to know about Monk’s amazing life and music) in Robin DG Kelley’s magnum opus biography Thelonious Monk: the Life and Times of an American Original.