Why did this magazine jump out at me amid all the splashy come-on covers on the rack as I killed a few minutes in Walgreen’s recently? Perhaps because it was the classiest cover by far, with several images adorning it, including a pure Camelot shot of debonair John F. Kennedy, at a speech podium, pointing across a crowd, with wife Jackie gazing adoringly at him. Photo by Tony Baldasaro 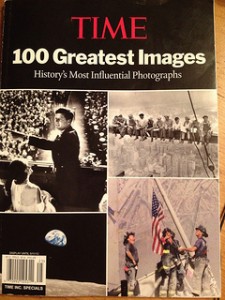 Juxtaposed to this on the cover is an unforgettable shot of 11 skyscraper construction workers perched precariously on an I-beam, 800 feet above the streets of New York. Though often attributed to Lewis Hine, the famous photo is by Charles Ebbets, who took it on September 29, 1932 amid The Great Depression. The guys sit chatting, munching and lighting each other’s cigarettes at the 69th floor level of the RCA building site. A thick steel cable rises diagonally, crisscrossed in the distance by the faint parameters of Central Park, amid a foggy         Manhattan cityscape below. These details  superbly offset the row of relaxed and heedless laborers.

I mean, there you are, dangling your tootsies over 800 feet of thin air. It shows how extreme working conditions like this can become commonplace when men, who are facing harsh economic realities, may have no choice but to accommodate such improbable environments. It’s also so damn American, so devil may care, so fearlessly quotidian.

A third image on this cover shows New York firemen raising the flag amid the cathedral-like ruins of the twin towers on 9/11.

By now you understand why the magazine, published by TIME, is titled 100 Greatest Images: History’s Most Influential Photographs.

I’ve seen most of the images in this, which would seem to preclude my buying it. But once I sat down with it, those familiar images and the new ones simply compelled me to accept them into my possession. Confederate Dead at Hagerstown Road by Alexander Gardner reveals piles of bodies lying in awkward, mute configurations, as a dirt trail and a crude wooden fence stretch off into the distance. It’s in the tradition of the great Civil War photographer Matthew Brady, but was taken by a Confederate soldier.

Another unforgettable shot places the underlying purpose of that war on center stage. You see The Lynching Of Shipp And Smith from 1932. Two young black men hang from a tree like Billie Holiday’s proverbial strange fruit, as white people in the foreground snicker and peer at the camera. One man, sporting a Hitler mustache, glares at you while pointing his finger up at the hanging victims, as if to say, “They deserved it, and so will any others of their kind.” Absolutely no one appears disturbed by the horrible carnage hanging above their heads. Photo (below) by Laurence Beiter 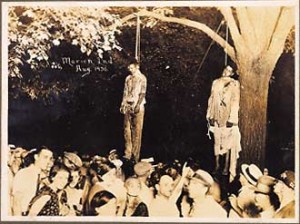 Then there’s the still-astonishing image of the Hindenburg, crashing in 1937. The German zeppelin suddenly explodes spectacularly in Lakehurst New Jersey. If you’ve seen the film footage of this tragedy, which killed 35 passengers and crew, the blimp  completely collapses within seconds, reduced to a flattened pile of flames. It brings to mind such other imagination-stretching transportation fantasies such as The Titanic, and the peculiar fascination people have with such larger-than-life vehicles of extravagant  means.

One more example of that, a shot of the oddly bending smoke trail of the space shuttle The Challenger, as it explodes a mere 73 seconds after lift off in 1973, killing six astronauts and Christa McAuliffe, a  37-year-old schoolteacher chosen by NASA to represent space exploration’s educational value . I was watching this live on TV and didn’t really comprehend what I was seeing, until several minutes later when the telecast comments explained things as best they could at that inexplicable moment in history.

age and see Adolf Hitler in his full Nazi regalia, climbing a staircase, surrounded by swastika banners held by soldiers, with thousands in the background ready, for one of his vitrolic and bizarrely charismatic hate speeches.

Turn the page once more and find a photo of a great African-American sprinter Jesse Owens, standing on the podium after winning one of his four gold medals in the 1936 Olympics, which was infamous for Hitler propagandizing on the racial superiority of the so-called Aryan race. the chief Nazi propaganda henchman, Joseph Goebbels, commented, “Without these members of the black race – these auxiliary helpers – a German would’ve won the broad jump.” African-Americans equated to “auxiliary helpers,” a curious and surprisingly delicate euphemism.

What else caught my eye?

— Refugees crawling across a huge steel bridge like so many ants, slowly and laboriously striving for freedom. This is Communist Korea in 1950.

— The agony of Roger Bannister’s breathless stride at the finishing tape as he breaks the four-minute-mile barrier in 1954, the first person ever to do so.

—  Ronald Haeberle’s photo of the My Lai massacre in 1968, which recalls the recent massacre in Afghanistan. Once again, American military murder citizens in cold blood. Here, the sprawling bodies also recall the dead Confederates, but this is in grimy color.

— One of the most shocking pictures is titled A Vulture Stalks Starving Child by Kevin Carter, documenting the 1993 famine in Sudan. The title says it all: the bird of prey sits patiently watching a suffering little girl, who crouches helplessly with their bloated belly and oversized head resting on the dirt. Carter struggled with the reality of the moment —  the question of what he should properly be doing. Even though he chased the bird away after taking this shot, Carter became increasingly depressed, the magazine reports, and took his own life in 1994, only weeks after his picture was awarded the Pulitzer Prize. It’s on page 108.

— One of the most beautiful photographs documents tragedy on a large scale: Floodwaters Submerge New Orleans by Smiley Pool shows sprawling sepia tones engulfing the rooftops of numerous New Orleans homes from an aerial view. All you can see amid the muddy water are rooftops (like so many board pieces on a monopoly game board) and treetops.

Yet it’s a gorgeous visual configuration in its minimalist way. That’s just a sampling of this remarkable magazine. You’ll find plenty of famous shots you’d hope to find and more images of scenes and events you had heard about, but now will likely never forget, because of how these photos burn themselves into one’s consciousness.

TIME and again, remind you of what strange bedfellows horror and beauty make.

7 thoughts on “Photos That Made History and Make You Remember”