The Rev. Martin Luther King had a dream that “we as a people” would get to.

We all know plenty of cynics and often might think they’ve got it right, as rotten as the world seems. After all, TV pundits and journalists of all stripes give us the daily double of bleakness and societal tragedy. Yet social and political activism, the fuel of empowerment against daunting forces of darkness, also burns brightly in America today.

Jesse Jackson famously said “keep hope alive,” a descendant of Martin Luther King Jr.’s iconic “I have a Dream” speech, and a father to Barack Obama’s profound book, and flagship theme, The Audacity of Hope.

It’s notable that all three great leaders were African Americans, who categorically need and benefit from self-motivational perseverance and pure survival instincts.

After hearing it I thought, Yes, what about “living the dream?” What about “the audacity of hope?”

I know when you first hear him, the music will seem almost effortlessly uplifting, which many people these days have built-in resistance to. It’s sad that such is the case, because we need the power of music to change people’s spirit and outlook more than ever today.

So I would suggest you simply go with the full-chested lyricism of Neumeyer’s song, which he sings in multiple vocal parts while accompanying himself on vibraphone, “Malletstation” synthesizer, and djembe, a conga-like hand drum. Especially considering Neumeyer isn’t known for singing (but he can sing!) the effect is stunning and, if you allow it to take you, rather exhilarating. The voices almost soar with the vibes-synth boost.

It’s a marvelous example of what one resourceful, positive-thinking musician can do today in his own recording studio with multiple tracking. For some, it might seem a bit slick, if not a bit too “feel good.”

However, I must counter that notion with an anecdote. I met Mike Neumeyer last year, shortly before the pandemic hit, when I sat in on a free-jazz improv workshop at the Jazz Gallery Center for the Arts in Milwaukee.

The premise of this workshop is the polar opposite of musical slickness, rather a striving for the ultimate in improvisational spontaneity and collective possibility. Neumeyer, although a highly accomplished musician, embraced the idea of free improvisation and did an excellent job as the guest workshop leader. His strong musical ideas, engaging style and personality made it all seem like a stimulating good time rather than intellectually challenging  or daunting, which the idea of free musical improvisation can seem.

Now consider his primary tools. On “Live the Dream,” hear his enveloping improvised solo on vibes. This can be an almost magical instrument – percussive yet melodic and harmonically buoyant and resonant, and sometimes quite sensual and sonically intoxicating. And in Neumeyer’s hands, marvelously exuberant in its lyricism, as in this case. As for his secondary instrument , the marimba – the wooden bars, by contrast to the vibraphone’s metal, make it a naturally warmer sound, where sometimes the vibes can sound chilly (The marimba can be heard on the instrumental version of the song 1 ). Neumeyer understands well the assets and limits of each instrument. Here, he rides the proverbial “good vibes” for all they are worth.

“All you have to be is willing to change,” he sings.

The message of the lyric suggests one can change your life in order to start “living the dream.”
Anytime I hear that philosophic proviso, that “you must change your life.” I think of the profound words of Rainer Maria Rilke. The phrase “you must change your life,” is Rilke’s most famous utterance. He is considered by many as Europe’s greatest poet of the modern age. As for me, his luminous beauty and wisdom prompted me and my bride to chose several of his poems in our 1997 marriage ceremony and program.

His quietly direct phrase is best appreciated in the complete poem from which it provides the closing line.

The poem is “The Archaic Torso of Apollo,” in which Rilke meditates on the headless body of the Greek god, as embodied in an ancient sculpture.

:We cannot know his legendary head
with eyes like ripening fruit. And yet his torso
is still suffused with brilliance from inside,
like a lamp, in which his gaze, now turned to low,

gleams in all its power. Otherwise
the curved breast could not dazzle you so, nor could
a smile run through the placid hips and thighs
to that dark center where procreation flared.

Otherwise this stone would seem defaced
beneath the translucent cascade of the shoulders
and would not glisten like a wild beast’s fur:

would not, from all the borders of itself,
burst like a star: for here there is no place
that does not see you. You must change your life. 2

You might draw enough from the closing two clauses:

“for here there is no place that does not see you. / You must change your life.”

But Rilke Is observing the extraordinary powers of beauty in the statue, the brilliance of the evoked gaze, the dazzling curved breast and the smile that runs through the whole body “where procreation flared.” Indeed, the Apollo figure bursts “like a star.”

Here, the poet gently places his hand on the museum-goer’s receding shoulder. He draws, from this sculpture’s positive potential and creative radiance, the wisdom that the observer must not walk away content with the status quo, that such artistic genius, truth and beauty must show how, almost mystically, right here, there is “no place that does not see you” in your complacency, your wooden-legged stolidity.

And yet, the effect of the sculpture’s presence, mystical or not, is a real sensation, Rilke insists, otherwise the sculpture “would seem defaced” by the decapitation.

Such is the force and inspiration of wondrous art. Apollo was a god, but also a human being, with an inner place where “procreation flared.”

Ergo, the power you sense: You must change your life. 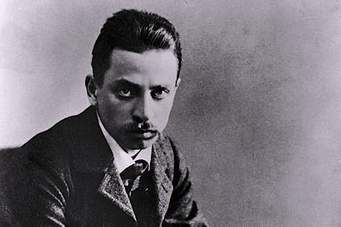 Almost embodying his evocation of Apollo’s missing head, poet Rainer Maria Rilke’s own eyes seem to say he meant it when he wrote, “you must change your life.” Courtesy apieceofmonologue.com

For me, I get something of that feeling listening to Mike Neumeyer, now. Indeed, you don’t need a great poet to draw such a message out of a marble sculpture, you can feel and hear it in this music.

Isn’t it high time to start working towards living your dream, however you envision that? High time, that more people, one by one if needed, start living the dream Martin Luther King had?  He knew, with almost god-like prescience, that “I may not get there with you.”

Aye, the TV tragedy. Guns and senseless violence. And yet, King promised “we as a people, will get to the promised land.” Might we still get there, even today, by changing our lives? That takes “inspiration” and “motivation” which gets us back to Neumeyer’s “Live the Dream.”

We do it one by one, by active heart and mind, until the people, the nation and the system change. One has to think, how else?

1 Neumeyer has also recorded a instrumental version of “Live the Dream,” which includes marimba, here: