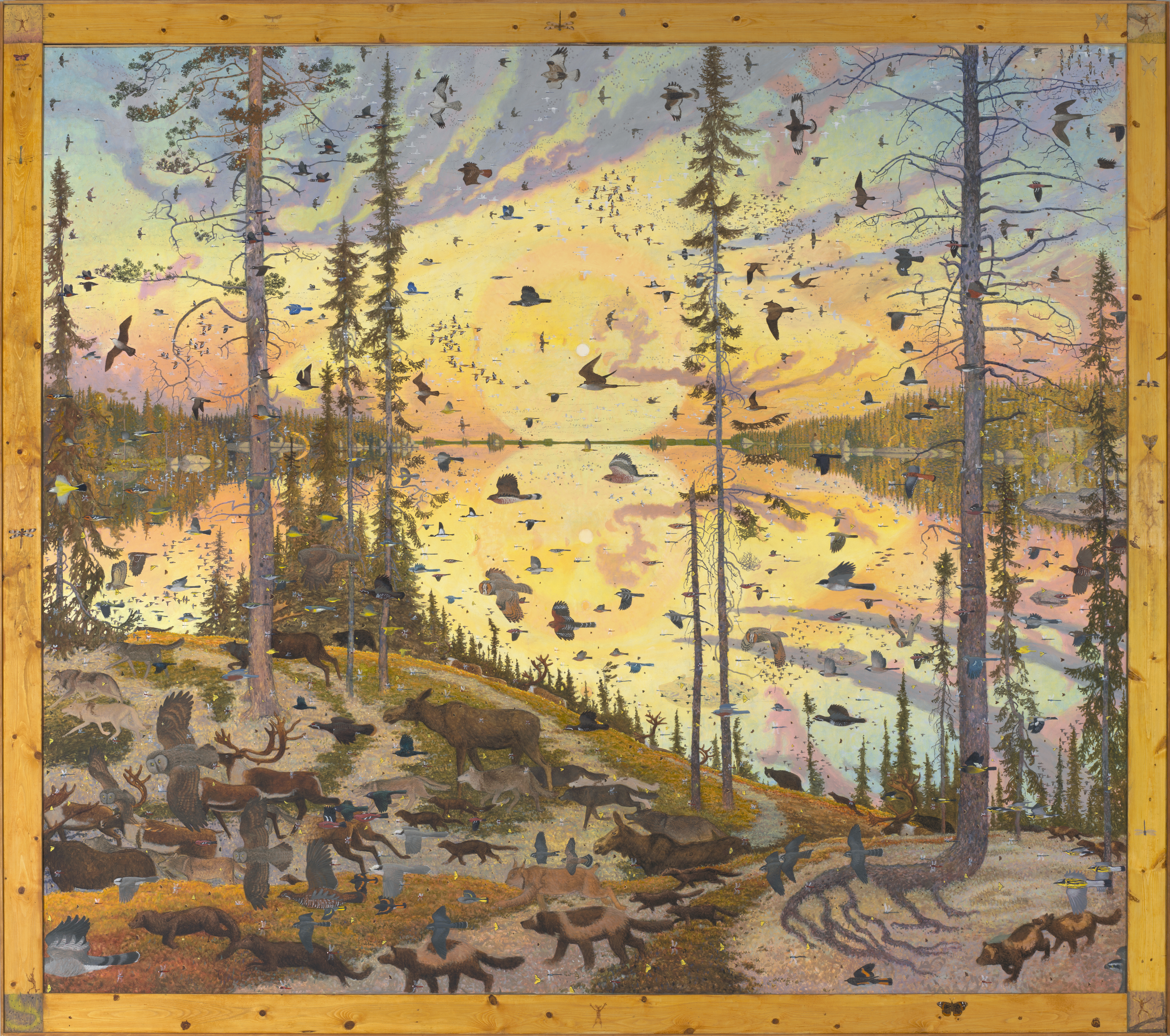 Time honors those who honor time, especially gifted cultural misfits, those who follow their vision, even to the most remote, forbidding or mystical realms, to the most precarious peak, who then muster the spiritual courage to take the deepest plunge that fate’s cavernous voice demands.

First, let me reach back, nearly a half a century, into the early stages of his saga, from my own nearby perspective. As a sculpture-concentration art major at UW-Milwaukee in the early 1970s, I had very little direct contact with painting professor Tom Uttech.

We sculptor-types hunkered and toiled in the blasted heat of the bronze-melting furnace, amid the grime and dust of the sculpture department in the fine arts building’s basement. Uttech, and his fellow painting faculty and students, dwelt in the comparatively exalted strata of the building’s top floor, blessed by generous shafts of illumination, only skylights separating them from the heavens.

There was a political aspect to this. The painters possessed a sheen of superiority, far above the sweaty, purgatorial Neanderthals pounding hammers and chisels, grunting to hoist crude masses of stone and wood, or be-goggled to wield flashing welding torches or hellish crucibles of molten metal. Sure, in our dreams, artistic glory lay, a la Michelangelo, entombed in those recalcitrant, flinty hunks, and Rodin-esque eloquence within the laboriously-assembled casting molds.

But, yeah, we knew our bottom-rung place in the realpolitick scheme of our art department. Yet, that doesn’t mean that, at some psychic level, I wasn’t intensely aware of Uttech’s quietly gathering power, as a somewhat mythic artistic presence in the building.

I’d occasionally see him floating through the department’s mid-level floors, where I took life drawing and other required 2-D media courses for art majors, and which he occasionally stooped to teach. The verb has multiple aptness, as Uttech’s looming presence had partly to do with his physical stature as surely the tallest person in the art department, during those years. His lanky body seemed to meander slowly to airy realms. Like many tall, gifted persons, he had a slightly aloof bearing about him. 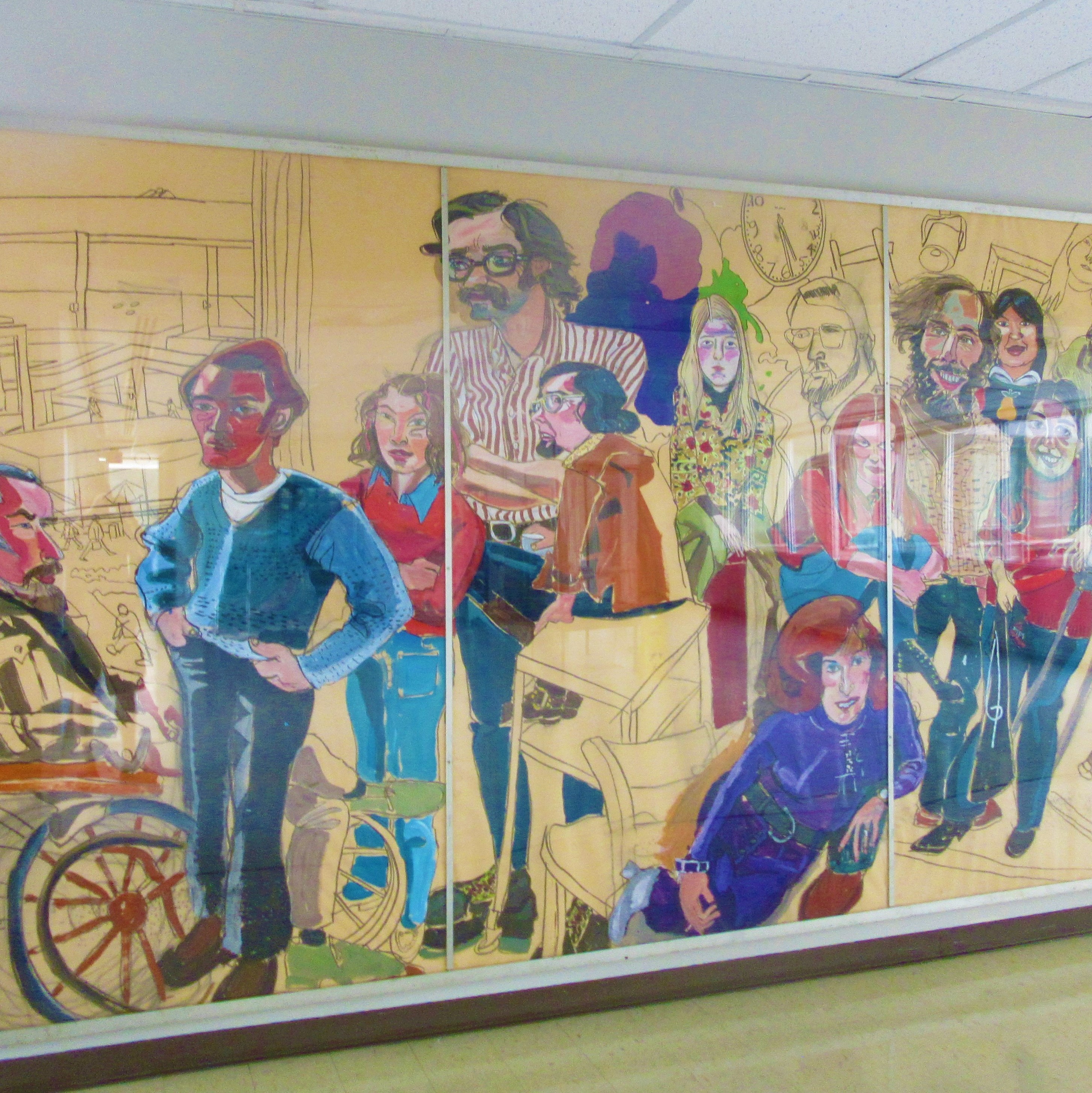 This mural, created by Red Grooms, is in the UW-Milwaukee art department commons, and depicts art faculty and students from the early 1970s, with painting professor Tom Uttech towering over the others. Photo by Kevin Lynch *

His stature and aura befit him as the undisputed North Star of the art department faculty. This had to do with the peculiar gravitational pull of his genius, something which this sculpture major felt, but only came to understand in time, perhaps begrudgingly. Maybe, like the many towering trees he painted, he often felt the wind whistling though his high-perched ears and eyes, singing siren songs of the north country. He doggedly trod a pathway to his visual and thematic sources across the region between Wisconsin and the Quentico Provincial Park in Ontario, Canada. 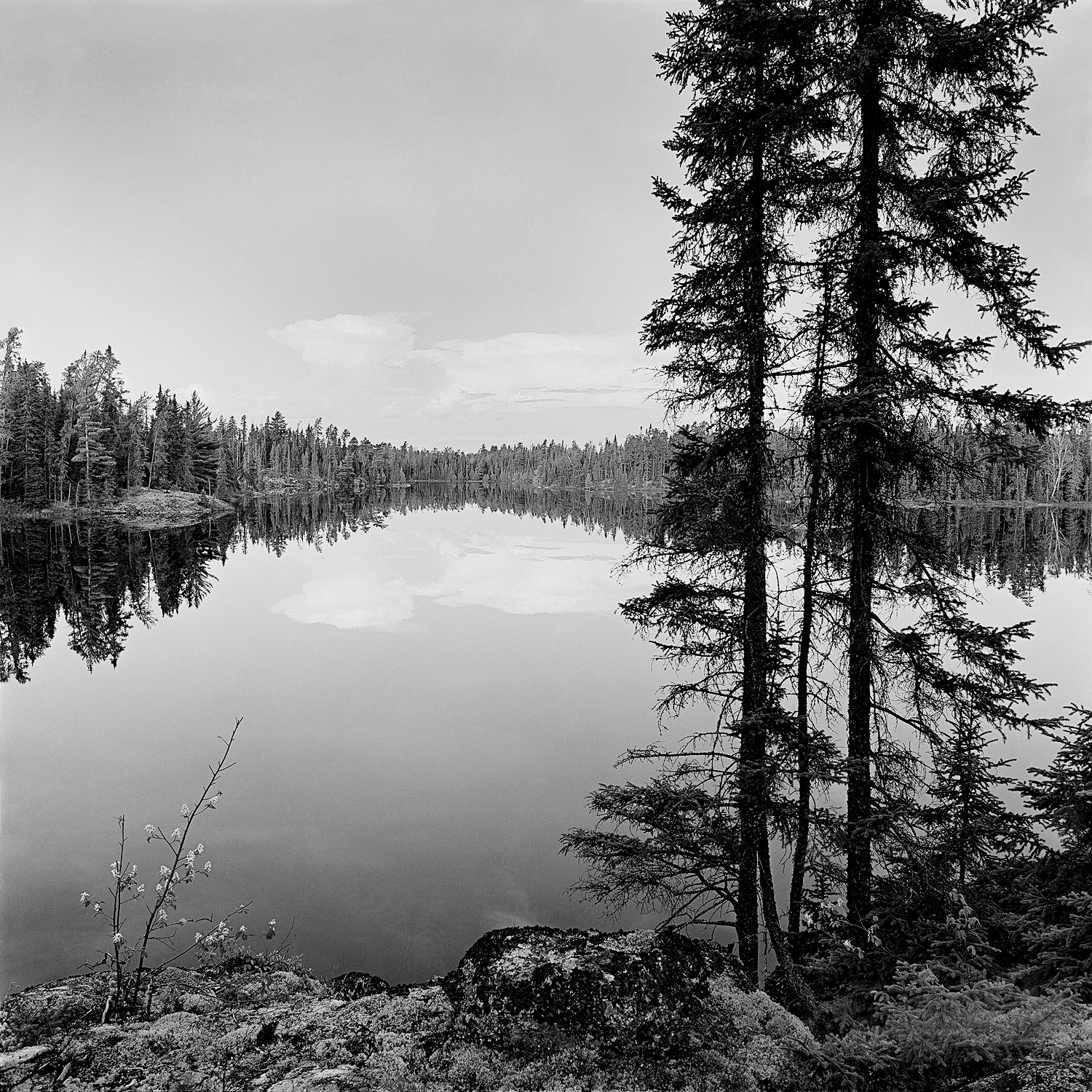 Bud Lake, from a 1974 photo print Uttech dubbed “Onimik Sagaigan,” was an area of Ontario that inspired the painter’s imagination.

So, time has decidedly honored Tom Uttech, as he’s done more than his reciprocal part for career destiny, and the grand strangeness of nature. This is abundantly clear by the magnificent and transporting retrospective of his work, Into the Woods, at The Museum of Wisconsin Art. It will close Sunday, January 12.

So heed my warning: Do not missed this exhibit encompassing, as nothing ever has, the grandiloquent accomplishment of one of the greatest artists Wisconsin has ever claimed her own, a man who’s mapped out a vast landscape of singular fashioning, as a true American original and visionary.

More than most artists, Uttech possesses the powers of a sorcerer wielding paintbrushes – if he swirled them just so they’d open a swirling vortex into a realm of nature as otherworldly yet vivid as one is a likely into encounter in one’s lifetime.

And yet that uncanny effect feeds on quietude, deriving from the extraordinary scale and imaginative leaps he takes consistently in his canvases. One senses a contemplative, even Zen-like authority in his artistic travels, as exotic as they appear, something deeply moving the more you open yourself to this work. Here, Nature gives birth to a thousand nights and lives, to myriad snorts, cries, growls and howls – emitting from the weirdly eloquent creatures that haunt the twilight of this man’s fertile imagination.

Of course, this art is soundless, but it seeps into the viewer as if all five senses quiver under exquisite siege. In some canvases, peculiar dramas stand poised to play out: Flora and fauna seem like they might just die even as they radiate strange, regenerative power. They might become another version of themselves, reincarnate. 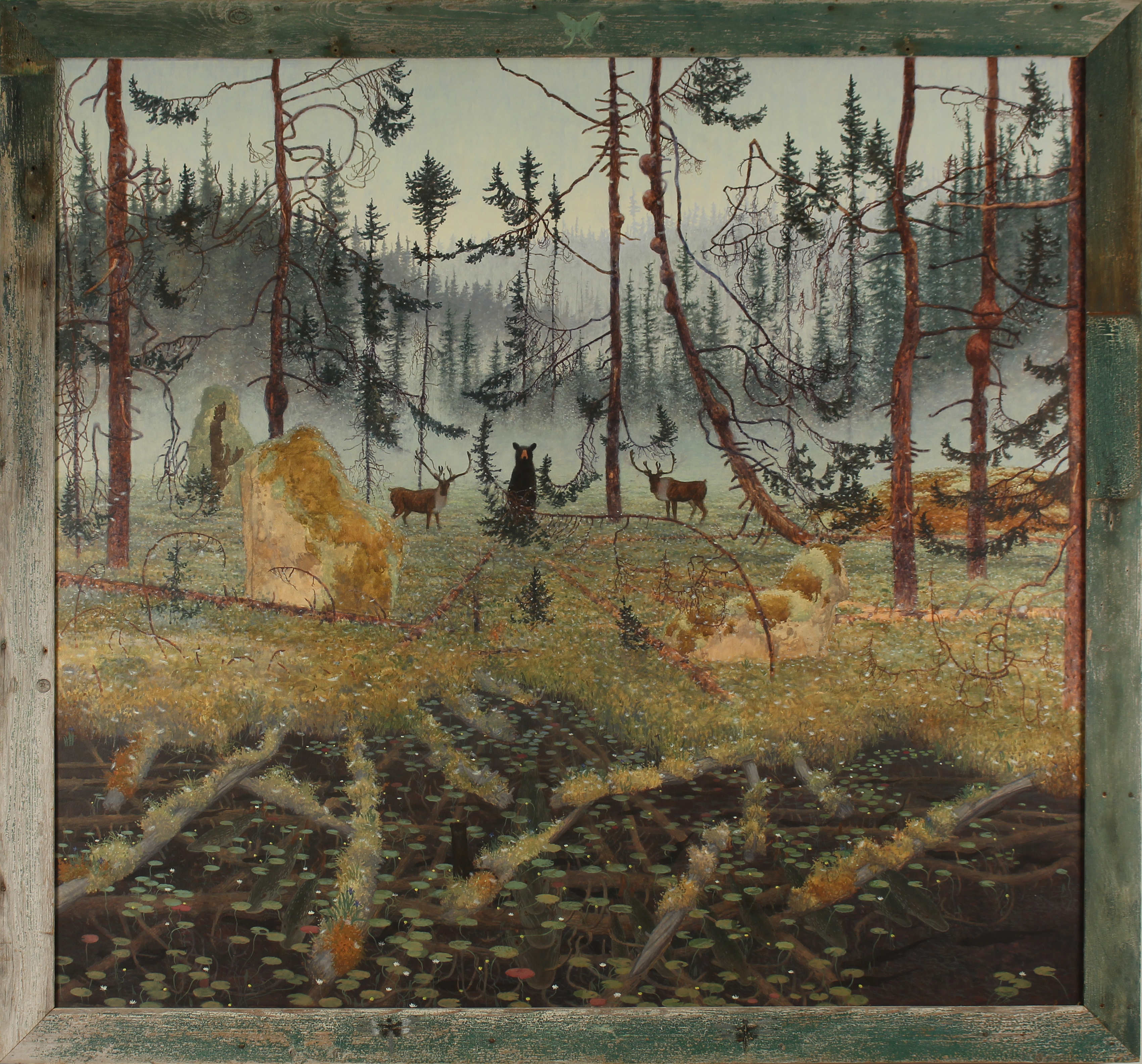 For example: The painting “Makwa Pindig Wabashkiki” centers on a tall, standing black bear peering out towards the viewer. Two great-antlered elks flank the bear, also looking towards the viewer in alert sentinel posture. All wait from a safe, wary distance. These two species, natural enemies, here seem allies; atmospheric mist shrouds the forest. All around them, highly animated tree branches and other flora perk up, as if anticipating something. Is the presence they sense a blessing or a curse, harbinger of tragedy, or transformation?

One may be inclined to stand before such a canvas, as with others in this show, and wait for something to happen. Such pregnant ambiguity typifies the aura of mystery that Uttech masterfully trades in, painting after majestic painting. 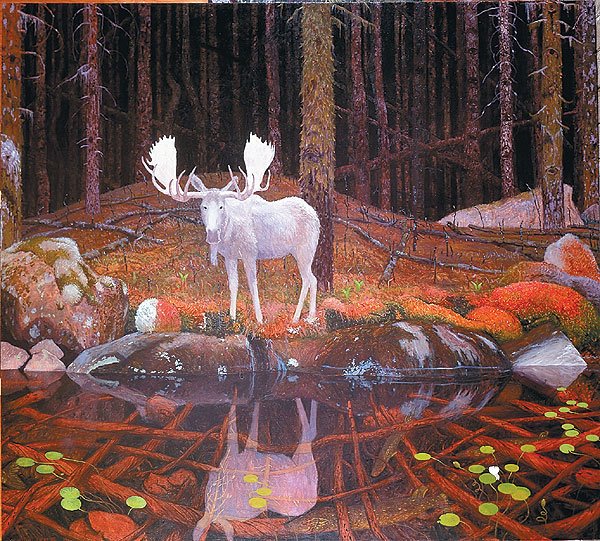 But how did Uttech get to such a certainly unfashionable artistic place? As a university professor in the 1970s and ’80s, he was intensely aware of trends in contemporary art, fading abstract Expressionism, pop art, minimalism, conceptual art, etc., all of which left him uneasy, and ultimately an outlier. But a fearless one who knew where he needed to go, to a realm more personal than an art movement, and perhaps more far-reaching. He arrived at a sort of Zen maximalism, if that makes any sense. Early modernist surrealists certainly took their imaginations to extremes, often tuning them inside out, as does Uttech. Yet, he’s worked in a private yet generous a realm derived from traditional nature painting. His titles mostly employ language of the native American Ojibwa tribe, who inhabited the region before European colonization.

Further, his work seems that of a much older and more literary soul than the surrealists, perhaps one borne of the 19th century and its transcendentalists, notably Emerson, but with a hoary helping of Thoreau, and deep inlets to the haunted black forest dwellers of Hawthorne.

Yet to see this art, one senses a man who evolved into a sort of contemporary mystic, as well as an obsessive virtuoso. A key work illustrating the former trait is “Painting for Buckingham Lake,” a luminous early painting from 1973. Unlike most of these color-saturated works, this one appears to have given up the ghost, a central specter-like figure bathes in pale blue and white light. The silhouette appears human but a mighty rack of elk antlers seems to emit from his head, recalling The Magus, the titular half-man, half-horned mammal god-like creature inhabiting a mysterious island in a magical post-modern novel by John Fowles.This is something the painter only could’ve encountered in the deepest forest of his dreams. 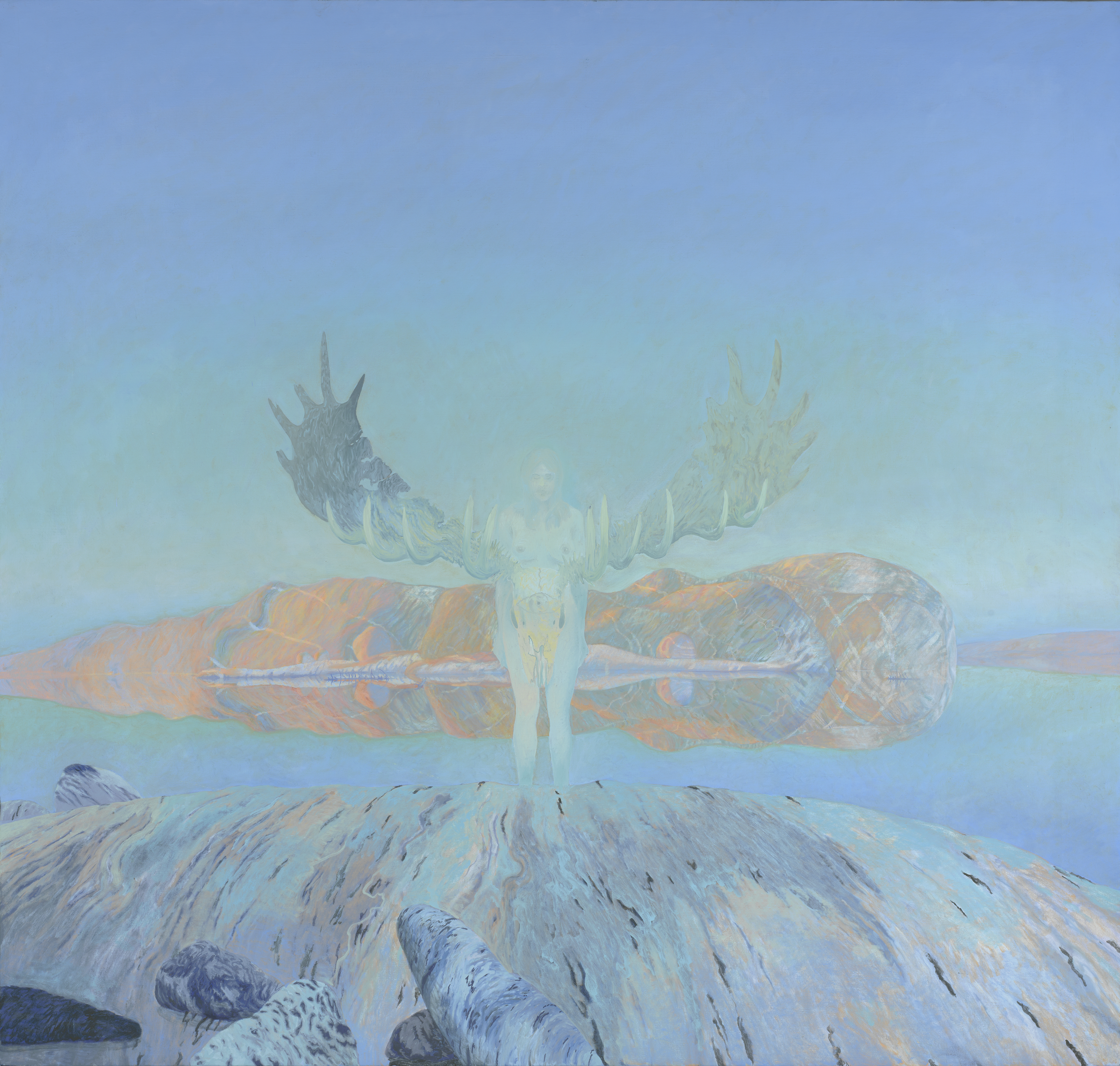 More typical here are large, stunning scenes teeming with birds and furry mammals, often all rushing together off the canvas view, drawn by some obscure force beyond. These are rendered in breath-taking detail and into almost infinitely deep perspective — an artistic style and vision I have never quite seen elsewhere in 35 years of writing about art. (see Nin Gassinsibingwe (I Wipe My Tears) 2019, at top) The paintings persistently evoke the questions: What larger spirit-force holds these scenes in the hollow of its hand? To what end? And what does it feel like to sense such questions?

Uttech today, now an avuncular 77, may have once, deep on his quests, mutated into an unfettered shaman, with craggy roots sprouting from his orifices. He does remain a bit of a spell-casting oracle, speaking today of a “secret” as the key to not only his art but also to our species’ troubled relationship to nature.

Uttech offers quiet empowerment, a sense of belonging, affirmation and adventure in a comment on a website marketing his artwork: “Since these pictures are about nature and our role in it, the knowledge gained might grow into love of nature, and thus into concern for its well-being,” he says. “This concern could lead to action to protect nature and, therefore, ourselves. The best response to my paintings would be for you to go straight to the wildest place of land you can find and sit down to let it wash over you and tell you secrets.”

Tom Uttech’s art creaks wide a vast doorway, luring all viewers to enter with open imagination and heart, to travel the right way back, into our whole humanity on earth. Perhaps the secret has something to do with survival.