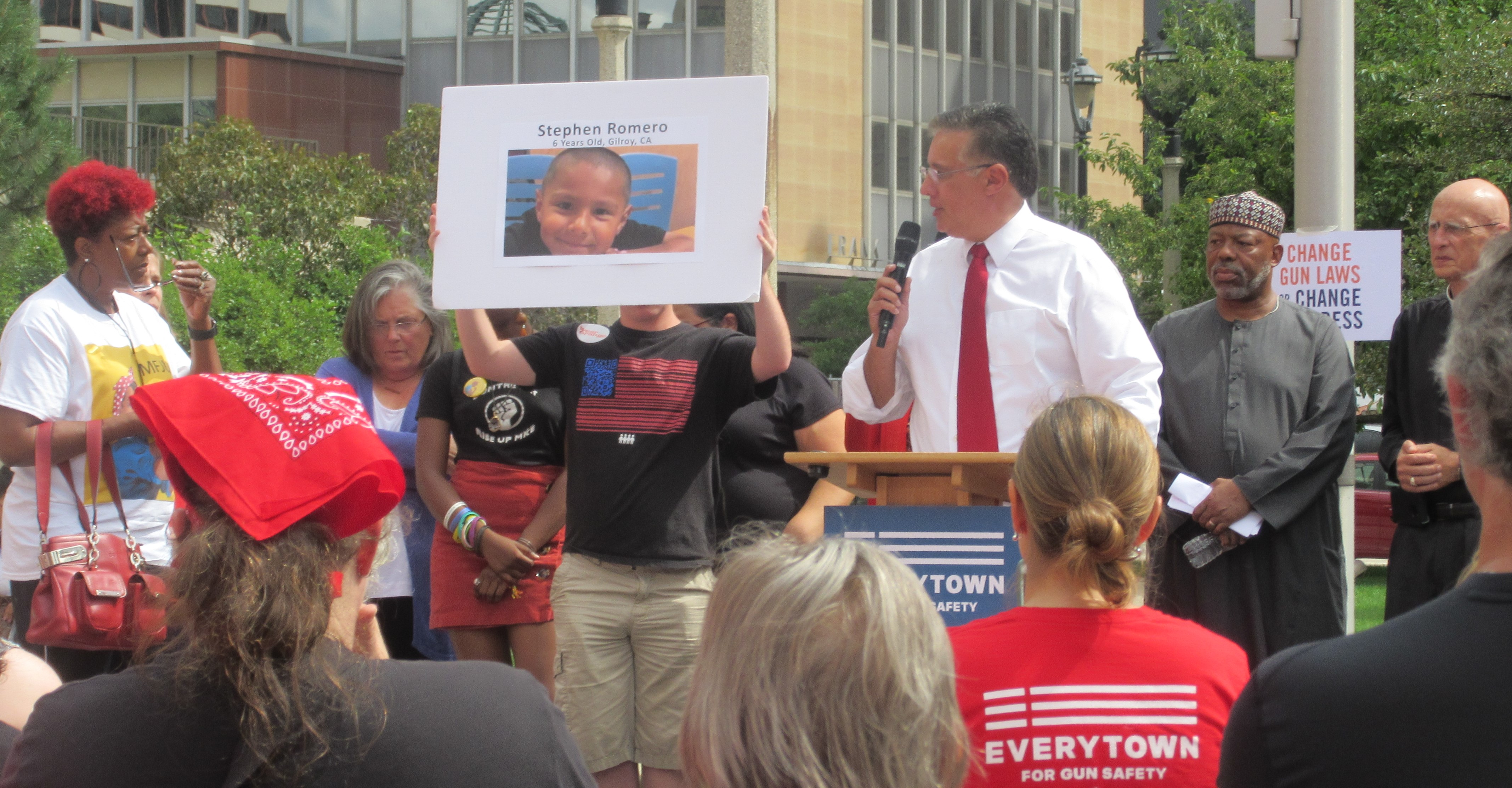 A gun safety rally speaker in Milwaukee’s Red Arrow Park shows a photo of Stephen Romero, age 6, a child killed in a mass shooting in California. All photos by Kevin Lynch, unless otherwise indicated.

I really want to celebrate Labor Day today, the working men and women of many immigrant backgrounds who built his nation, and sustained its success and glory, time after time after time. I hear their work in my mind, the rhythms of the hammer, and of the sewing machine, of the printing press, even the offbeat hits of the teacher’s chalk on the blackboard. They are why America is still a great nation and continues to be. I fly my American flag proudly today in front of my home.

But Lord, we have our profound faults and that drives me to this post, because of the profligate abuse of guns everywhere, because of the seemingly mindless, or racist or vengeful carnage, and the heartbreak, the shattering of families and the blood-spattered social fabric. And because of the facile, pathetic rationalizations for inaction.

I am prompted to revisit a rally I attended on August 18, after the very latest mass slaughter in Texas and elsewhere –– how do we keep up with them all? – and another protest for gun safety this weekend, which I missed. The gun safety rally in Milwaukee I attended was held in Red Arrow Park, the site of the killing of Dontre Hamilton. This was a powerful and moving experience. I try to gain inspiration from it. So I am sharing some photos and video from that event in hopes blog readers will gain some inspiration for action.

Red Arrow Park is profoundly significant because part of our nation’s terrible gun problem is the militarization of the police, and their excess of deadly weapons, their institutional and, for some, individual racism, and their reflex to shoot in the slightest doubt, and argue that it was self-defense. In 2014, Hamilton was shot 14 times by a Milwaukee police officer who approached him where he was sleeping under the Red Arrow Park sculpture, a block from City Hall, and across the street from the Marcus Center for the Performing Arts (I’m happy that Milwaukee Mayor Tom Barrett attended in support of this event.) 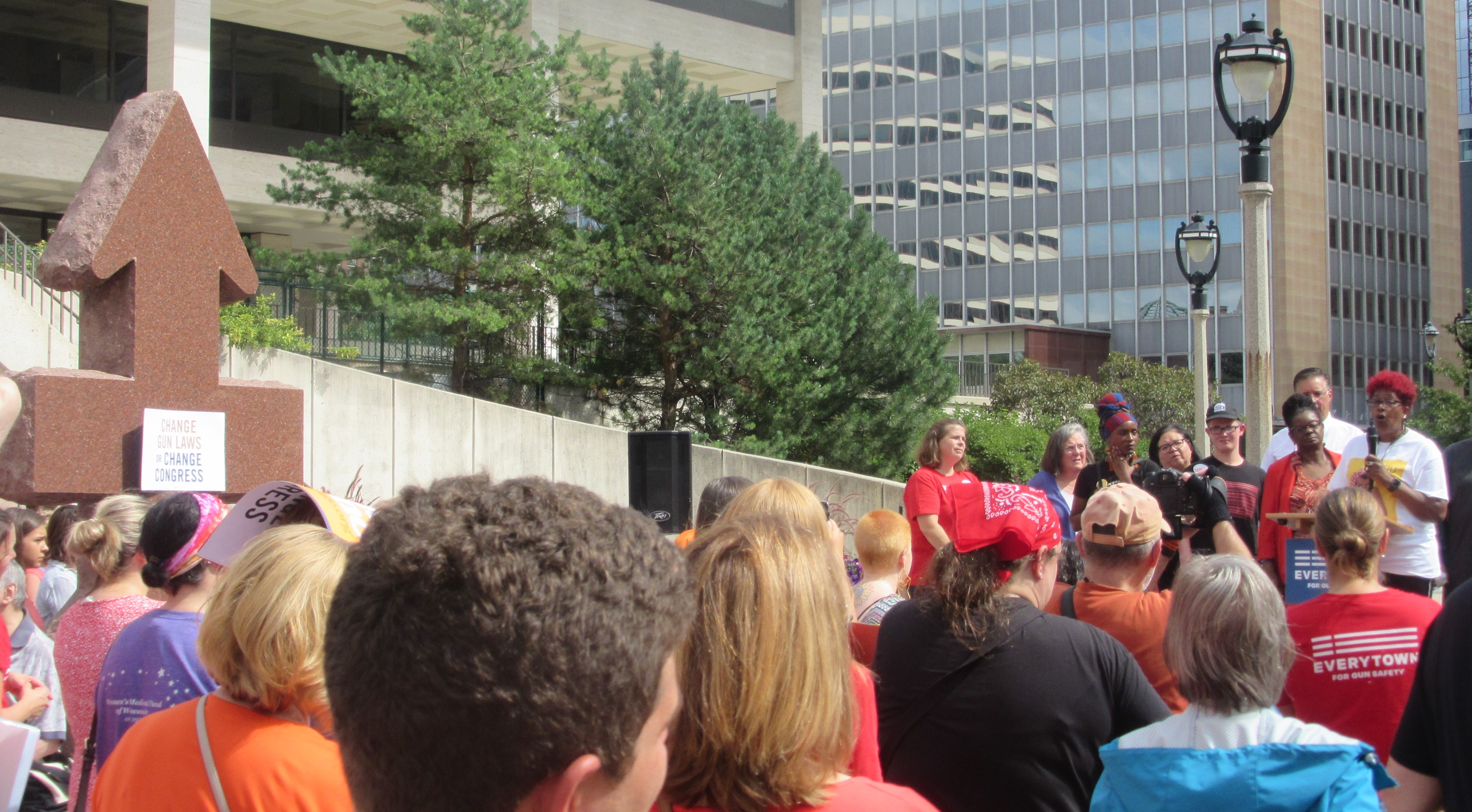 Maria Hamilton (far right, in white), mother of Dontre Hamilton speaks a few feet away fro the red arrow sculpture, under which her son Dontre was killed by a Milwaukee police officer in 2014.

Police had previously responded to a call about Hamilton sleeping there and determined that he was causing no harm. But another officer, Christopher Manney, didn’t get that message and showed up and woke up Hamilton who, after being confronted, apparently grabbed the officer’s nightstick, at which point Manney immediately emptied his gun into Hamilton. 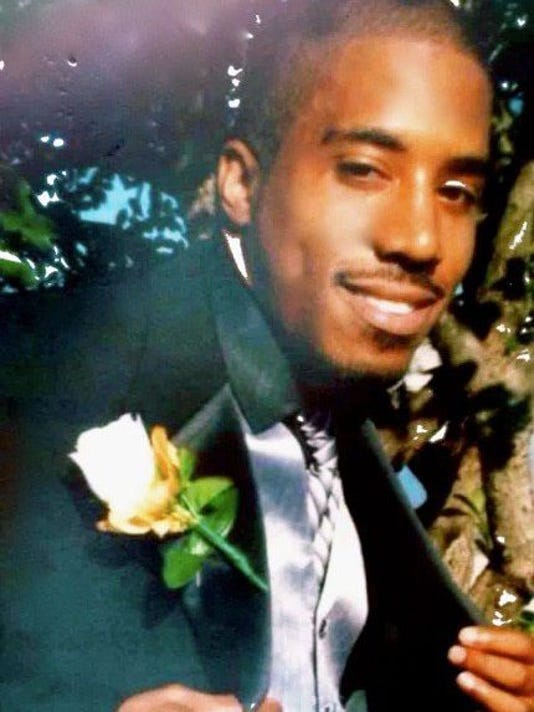 The full Hamilton family story, tragic but also inspiring, is told magnificently in the award-winning film Blood is on the Doorstep which wrote about in depth in this blog at its Milwaukee premiere, and which I dearly recommend to anyone who cares about the deaths of unarmed black men. Here is a link to a trailer, and access to the film which is available by streaming currently, and available through Netflix: Blood is at the Doorstep

The protest event I attended was extremely special because of the presence of Maria Hamilton, Dontre’s activist mother. She spoke briefly, saying “now is the time” for common sense gun safety measurements like background checks. We also need to get rid of the military-style assault rifles on our streets, and in the hands of more potential mass murderers. 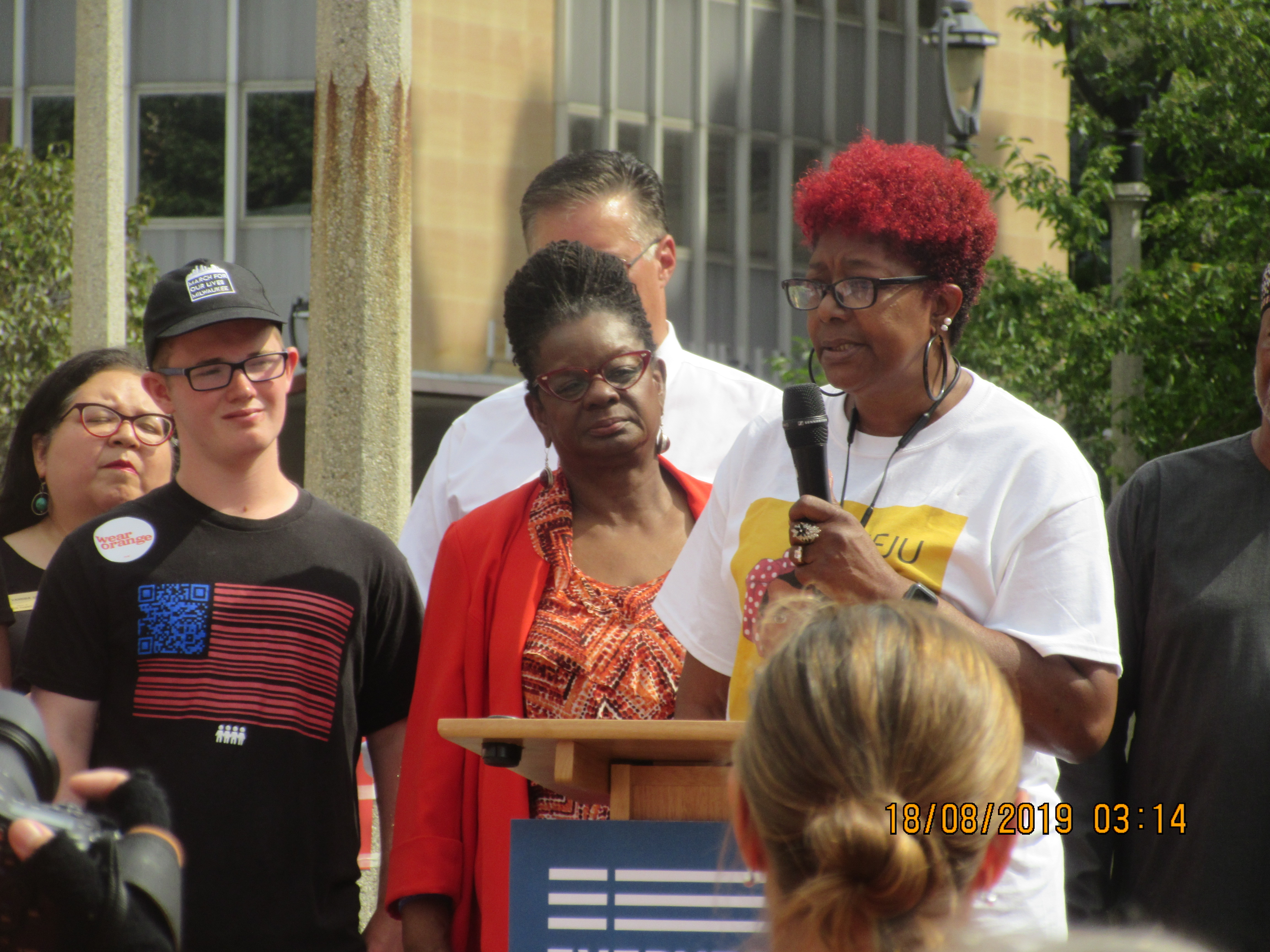 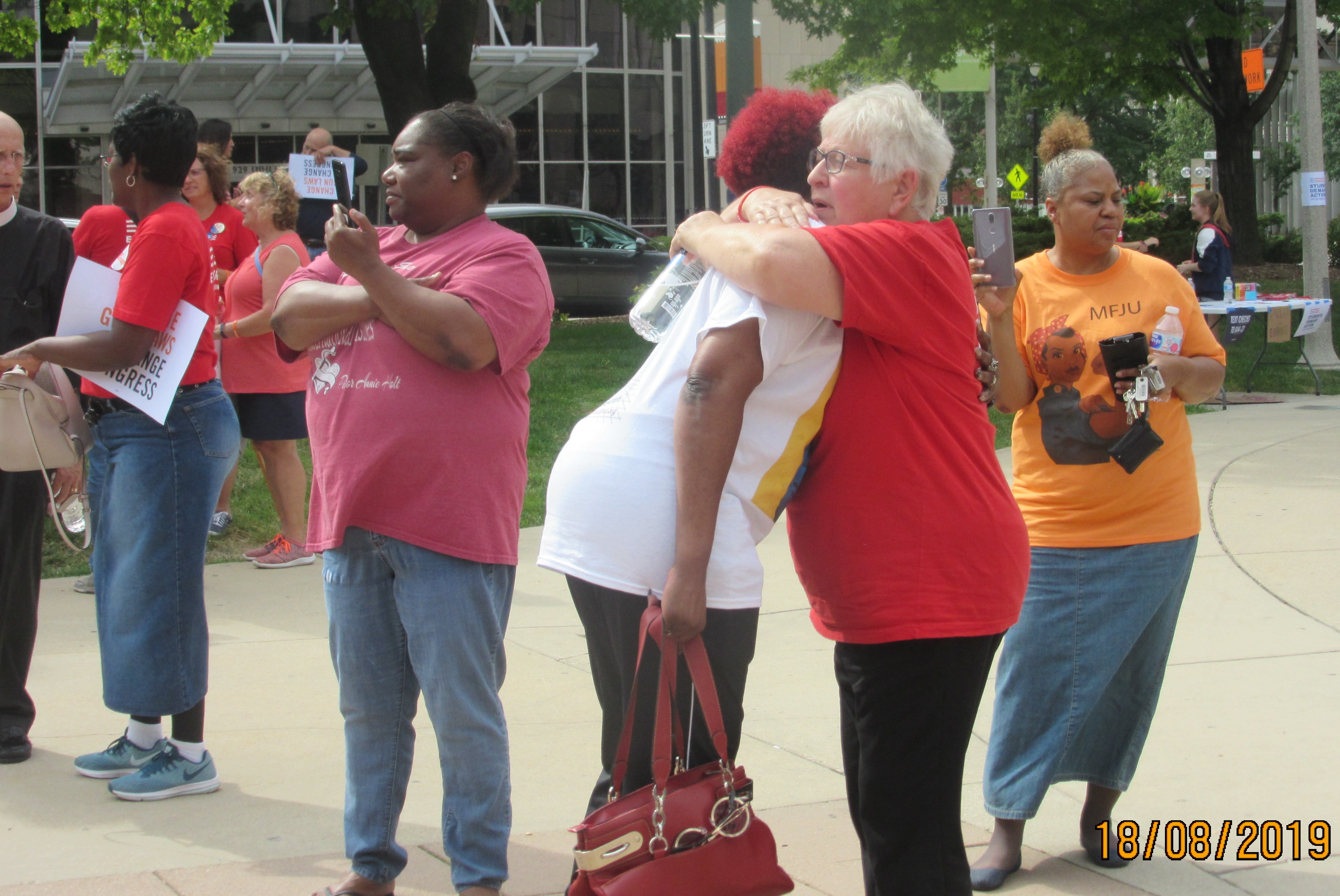 Maria Hamilton (top, right) speaks with U.S. Rep. Gwen Moore beside her. A rally attendee (above) consoles Maria after the rally.

When Maria Hamilton took the microphone, it hit me very hard. She spoke only a few feet away from the spot where her son was gunned to death. All new reports I’ve read say he was either “beneath” or “beside” the red arrow sculpture. Then, after the rally, I was stunned by something I saw, when I sat down on the base of the sculpture. I looked down at my feet at the granite surrounding the sculpture and I noticed some stains in the stone, faint red stains that many might easily overlook at this point in time. But I could not help feeling that I was looking at bloodstains and that, whose else might they be but Dontre Hamilton’s? 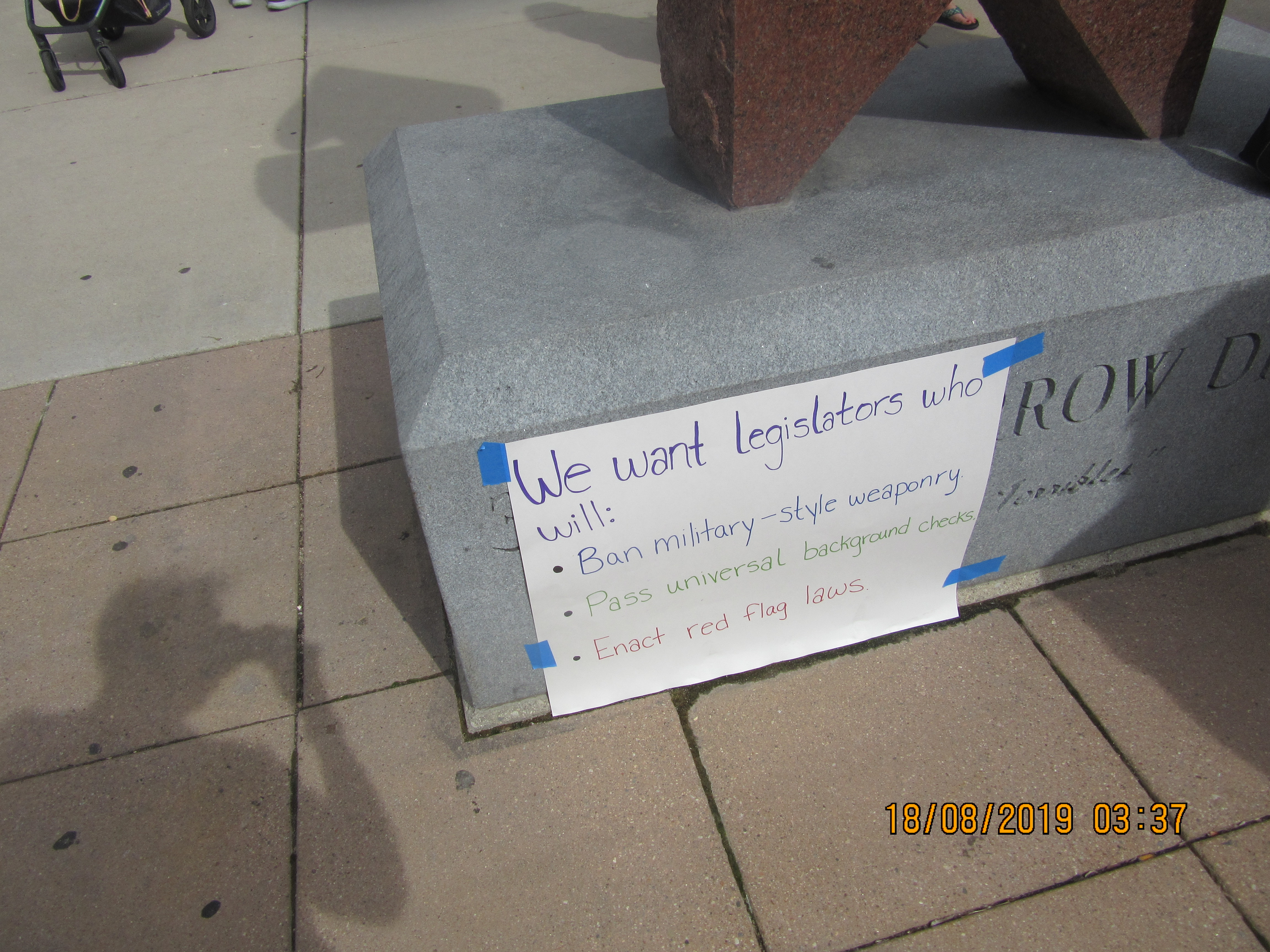 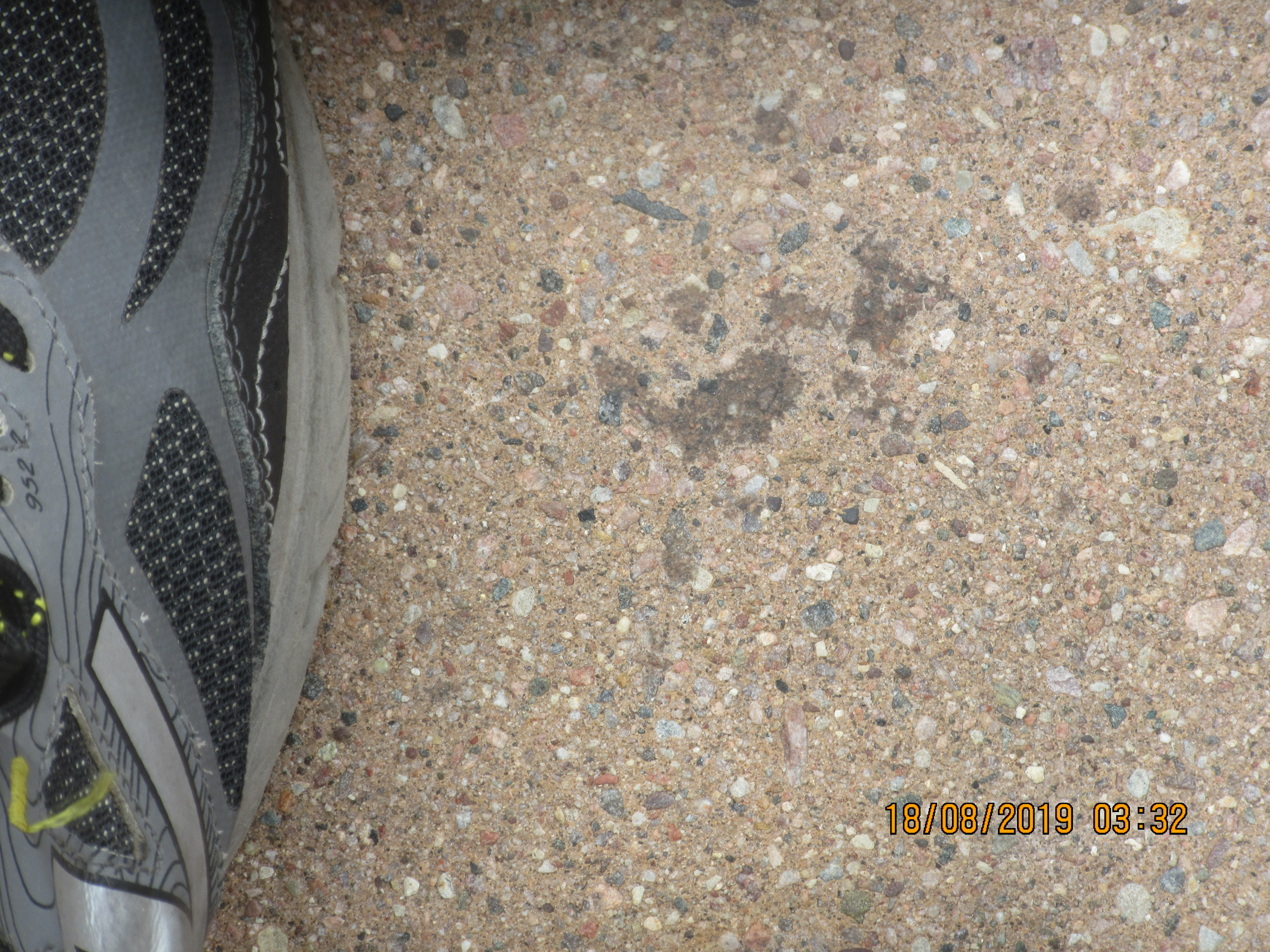 After the rally, I sat down at the base of the red arrow sculpture (top) and saw these red spots (above), next to my shoes, right on the location where Dontre Hamilton was shot 14 times in 2014. Now I believe they are Dontre’s blood stains.

I don’t even know if Maria Hamilton knows that the stains are there. I did not feel like approaching her afterwards. But I took a photograph of the stains and you can think what you might about this. But, believe me, those stains haunt me, even symbolically, even if it is not really what it appears to be. Philip Roth once wrote powerfully of “the human stain” of racism, and the phrase’s symbolism resonates to the deep heart’s core of the America.

Several speakers spoke on the broader issue of gun violence at the event which was one of over such rallies 100 nationwide that day, sponsored by Moms Demand Action for Gun Sense, Students Demand Action, and Hometown for Gun Safety, the nationwide organization which I was happy to help support on my birthday on Facebook with the assistance of various friends, whose contributions I am very grateful for. 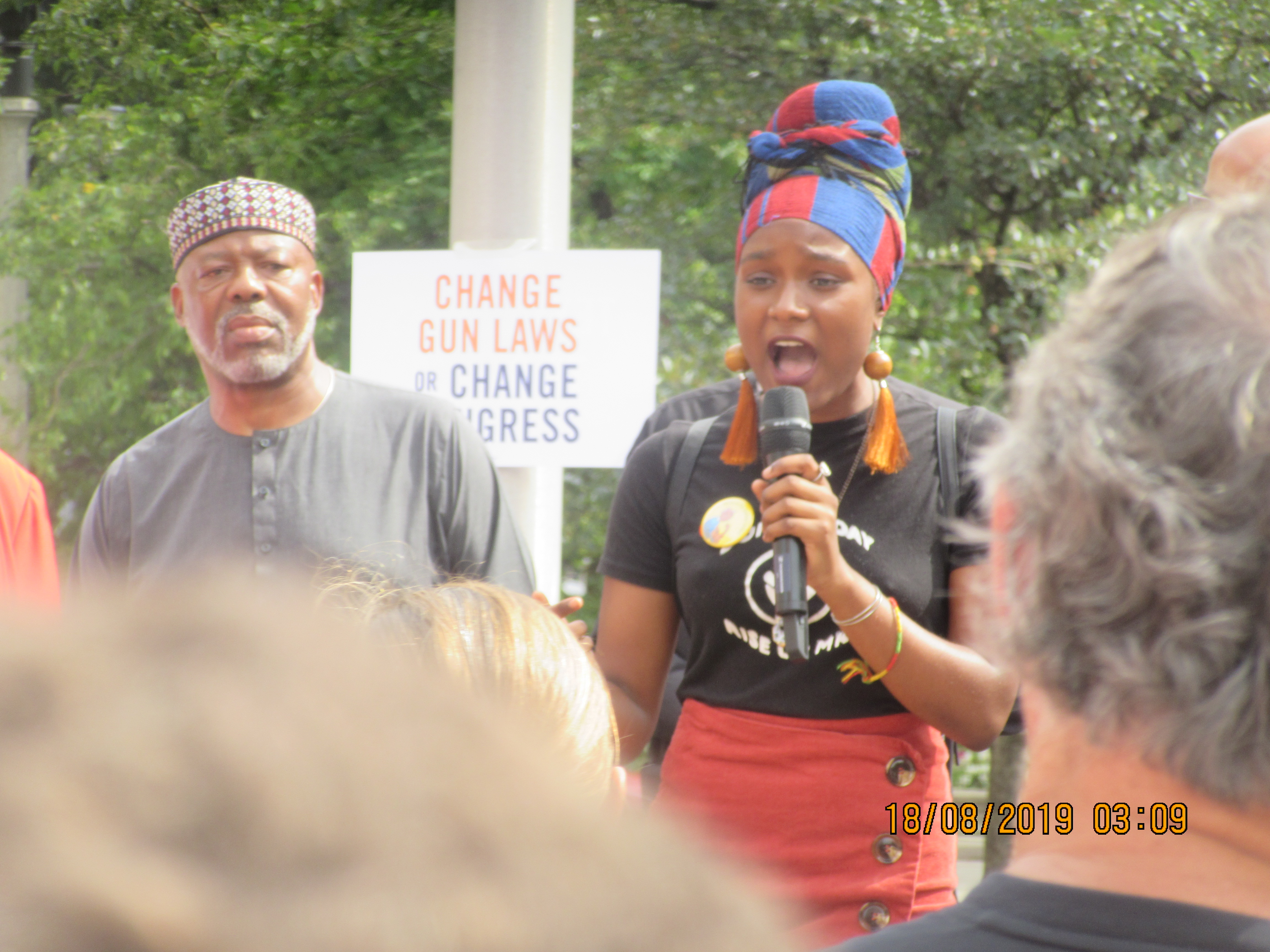 One of the most impressive speakers was a young black woman activist (above) who had said she had a prepared speech. But when she got up there she was so fired up that she simply spoke spontaneously for about five minutes. She spoke intelligently, directly, eloquently, and passionately.

The blood is clearly on the doorstep of Congress, just as were the numerous pairs of shoes that were laid out symbolically on the lawn in front of the Congressional building In Washington, representing the hundreds (thousands?) of children we have been killed by gunfire since the Sandy Hook massacre of school children and their teachers. 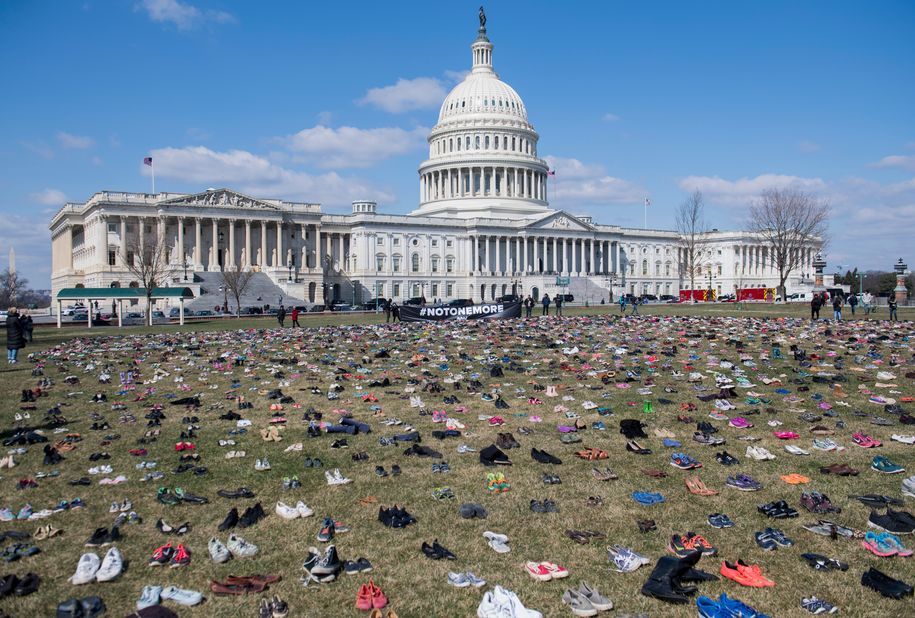 A recent protest involved placing pairs of shoes on the lawn of Congress to signify every child killed by gunfire since the Sandy Hook massacre. Courtesy GettyImages

Any paranoid gun owner who worries about the ridiculous “slippery slope” notion of gun restrictions, is basing his fear on no evidence.

Neither I nor anyone who cares about reasonable gun safety gives a hoot about your collection of guns. We just want to stop the insane carnage in the only advanced country in the world in which this happens to this degree, by a long shot (sad pun intended).

Guns do kill people, about 40,000 in America every year. When the NRA says “no, people kill people,” remember, no person has ever killed any person by pointing with a forefinger and a “cocked” thumb and shouting “bang!”

A killer has to have a gun in his hand, dammit. I’m sorry, like Beto O’Rourke in Texas and most of America, I’m beyond horror, unhappiness and grief. This is our nation and these deaths were our lives, our mothers and fathers, brothers and sisters, our dear friends. They will continue to be.

Every citizen and inhabitant must play a part now, in changing this self-destructive and self-centered brain-lock, and heart-lock — at least among a small group of powerful American politicians and gun industry lobbyists.

1 Full disclosure, I attended this rally as a belated participant, not as a reporter. Consequently I didn’t take notes (my hands were full) so I don’t have IDs on all the speakers pictured in the photos. There was very little post-rally news coverage of the event that I can find, with such details. My apologies.